Physically-based simulations can improve the quality of registration of medical images by introducing context information that is not present in the matrices of pixel intensities that typically define images. We are developing image registration algorithms that achieve high accuracy by combining physics-based models of tissue deformation with optimization algorithms. Our methods have the potential to enable more precise radiation treatments for cancer and also facilitate guidance of medical instruments to clinical targets.

We developed an image registration system based on physically-based modeling and simulation of the prostate and surrounding tissues to register cancerous tumor locations for targeted prostate brachytherapy treatment planning. Cancerous tumors can be identified using magnetic resonance spectroscopy (MRS) imaging, which is acquired with an endorectal probe that causes significant nonlinear deformation of the prostate. The probe is removed during magnetic resonance (MR) imaging for brachytherapy planning and therapy. 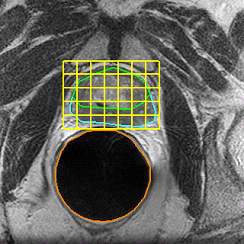 (a) Given probe-in image with MRS grid 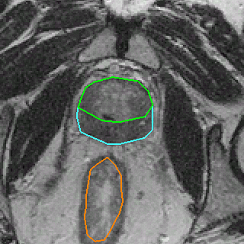 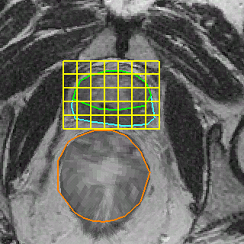 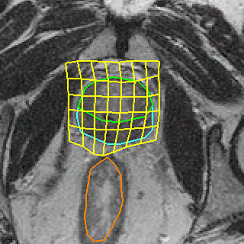 Given 2-dimensional segmented probe-in and probe-out images, our finite element based model defines a mapping between the images by estimating the deformation of the prostate and surrounding tissues due to endorectal probe insertion and balloon inflation. Treating uncertain patient-specific model parameters for tissue stiffness and external forces as variables, we compute a locally optimal solution to maximize image registration quality.